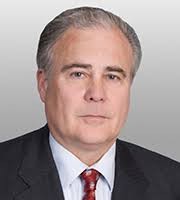 Bill Chip is currently the Principal advisor to the Secretary of Homeland Security on immigration policy. He is a retired partner of Covington &amp; Burling LLP.  Mr. Chip has over thirty-five years of tax experience, including nine years as a global audit firm partner and twenty years as a law firm partner. Over the course of his career, Mr. Chip has represented and advised both emerging and established multinational enterprises headquartered in the United States, the European Union, Latin American, Asia, and the Middle East, including companies in the financial services, life sciences, commodity trading, and energy industries. He advises Tax Directors, General Counsels, and CFOs on the international tax aspects of business globalization, strategic acquisitions and joint ventures, integration of acquired and pre-existing businesses, and the use of complex financial instruments for corporate finance and risk management. He has achieved favorable settlements of complex international tax controversies with the IRS examination and appeals divisions, in the courtroom, and in Competent Authority proceedings.

A preeminent transfer pricing expert, Mr. Chip regularly manages global transfer pricing projects that cover planning, documentation, audit defense, and negotiation of Advance Pricing Agreements.  In matters involving tax jurisdictions outside the United States and United Kingdom, Mr. Chip relies on a well-established network of eminent foreign tax attorneys in other countries and often collaborates with one or more of the Big Four accounting firms. As a long-serving member of the Business and Industry Advisory Committee (BIAC) to the Organization for Economic Cooperation & Development (OECD), he has been an active participant in the ongoing debate over Base Erosion and Profit Shifting (BEPS). Prior to entering law school, Mr. Chip served as an officer in the U.S. Marine Corps, attaining the rank of Captain.