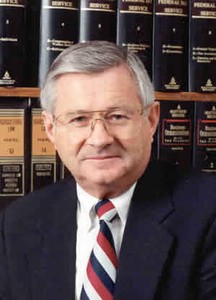 Neil E. Harl is Charles F. Curtiss Distinguished Professor in Agriculture and Emeritus Professor of Economics at Iowa State University, Ames, Iowa. He is a member of the Iowa Bar. Dr. Harl was Director of the Center for International Agricultural Finance from 1990 through 2004. His major fields of law interest include estate planning and taxation, business planning and agricultural law.

Dr. Harl has published widely including 29 books; more than 400 professional articles and bulletins; and more than 850 articles in farm and financial publications. He is author of the two volume treatise, Farm Income Tax Manual, the single volume Agricultural Law Manual and the 17th edition of Farm Estate and Business Planning , published in 2013. He is also the author of the 15-volume treatise, Agricultural Law, LexisNexis/Matthew Bender & Co.;  the single volume, The Farm Debt Crisis of the 1980s, Iowa State University Press; and Arrogance and Power: The Saga of WOI-TV, 2001; the single volume, Farm Estate and Business Planning, 18th edition 2014 (the item sent listed the 17th edition).

Dr. Harl has served on seven federal advisory bodies – a Farm Tax Reform Task Force for the U.S. Department of the Treasury in 1967; the Commissioner's Advisory Group (Commissioner of Internal Revenue) in 1979 - 80; the USDA Farm Structure Task Force in 1980; the Office of Technology Assessment, Technical Advisory Committee, by Congressional Appointment, 1987 - 1995 (chair in 1993 - 94); the USDA Advisory Committee on Agricultural Biotechnology, 2000 - 2002; and the Commission on Federal Payment Limitations in Agriculture, 2002 - 2003. Dr. Harl was a member of  the seven person panel as the First Working Group to Assess the U.S. Response to the needs of transitioning economies in Central and Eastern Europe and the Former Soviet Union in 1990. He served as the founding chair of the Center for International Agricultural Finance at Iowa State University which conducted 79 schools in banking, credit, finance, free market economics, central banking and bankruptcy throughout the group of countries transitioning to a market economy from central planning from 1990 through 2004 and has been credited with major contributions to the transitioning process.