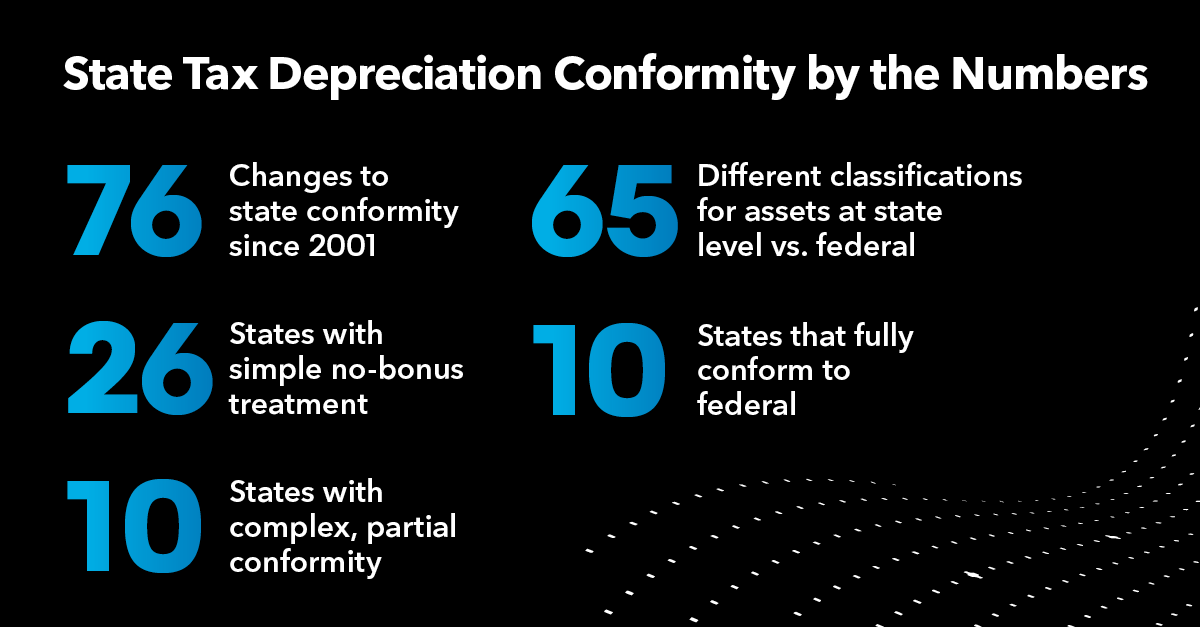 Calculating state depreciation has long been a source of frustration and stress, with tax accountants going cross-eyed staring at complicated spreadsheets while under the looming threat of audits or fines. Since bonus depreciation was first enacted by Congress in 2002, many states have opted not to follow the provision and have required taxpayers to add back to the starting point amounts deducted for bonus depreciation.

With the passage of the 2017 Tax Cuts & Jobs Act (TCJA) and changes to depreciation therein, states have made a flurry of updates to their own laws to either comply with federal standards of depreciation or decouple from the new standards to amplify their own tax revenue. In the area of fixed assets, state nonconformity isn’t as simple as bonus or no-bonus, and practitioners need to be aware of the various (and sometimes downright strange) treatment of fixed assets depreciation across the 50 states.

Of course, things would be much easier if all 50 states and the federal government followed the same tax standard when it came to bonus depreciation rules, but when has tax accounting ever been easy? To help navigate this tangled web of state conformity, here are three things you can start doing today.

Did you know there have been 76 different changes to state conformity since 2001? States will change their conformity depending on a number of different factors, including the economic situation and the political environment – or in response to the changes in businesses or industries that are in the state.

And following any adjustments to federal tax law – such as the major changes contained in TCJA – there is even more activity in this area. States are changing their laws all the time, and it’s not always national news. In order to ensure you’re staying in compliance, keeping track of the changes to each state’s tax laws is a must.

When looking at state conformity changes, keep in mind there are three patterns:

Find out each state’s conformity and federal bonus depreciation rules

“You need to make sure that you watch out for particular state conformity issues when computing, not just your depreciation, but all of your state taxable income,” Sheehan says.

Static conformity means the state conforms to the Internal Revenue Code as of a certain date, and legislation is required to change that conformity date. So when the 2017 tax act passed, these states were automatically not conforming to any of the new standards, and they had to enact legislation to make any desired changes.

“What we saw is states tended to focus on individual tax pieces first, such as the things that were affecting your 1040,” Sheehan says. “They actually have just recently started to finally give us some answers on what they’re doing to conform to TCJA on the corporate side.”

Texas is a static conformity state that is conforming to the IRC as of Jan. 1, 2007, which means that the bonus rules that were enacted at that time don’t apply. Since they’re using an old law that has expired, and bonus depreciation is considered a tax extender and not a permanent part of the tax code, that’s why Texas is not following bonus as of this year.

For states that conform to the IRC automatically on a rolling basis, legislation is also required if the state chooses to opt out, or “decouple,” from particular provisions. This creates a risk for taxpayers in the state, as they are essentially required to file their taxes without knowing for certain if the state plans to opt out.

In the area of bonus depreciation, a number of states have made changes to conformity over the years, including recent changes post-TCJA. As of 2018, there are 16 states that fully conform to the federal code, 28 states that have opted out, and three states that partially conform to the provision but have some unique differences. And then, as always, there are exceptions. California, for instance, uses different depreciation methods from the federal government.

Minnesota is an example of a partially conforming state that has made recent changes through legislation. A tax bill was signed on May 30, 2019, that generally conforms Minnesota law to TCJA, whereas the state previously conformed to the Internal Revenue Code as amended through December 16, 2016.

Under the new law, Minnesota will continue to require 80% of Section 179 and federal bonus depreciation to be added back and then deducted pro rata over five years to arrive at Minnesota taxable income.

“The Department of Revenue is still working on publishing some revised forms for 2017 and 2018 to address these last-minute tax law changes,” says Ellen Barker, a subject matter expert for Bloomberg Tax & Accounting.

Another example is Connecticut, which has disallowed bonus depreciation for corporate business tax purposes since 2001 but allowed the deduction for personal income tax purposes until recently. Illinois and Pennsylvania are previously partially conforming states that switched following the passage of TCJA. Illinois now allows you to take bonus depreciation, while Pennsylvania has switched from its complicated method to a simple no-bonus treatment.

Keeping a close eye on legislative activity is critical to ensuring you’re using the most up-to-date standards when calculating for state. One way is to set up website alerts so that you’ll receive an email if a state tax webpage is updated. Another way is to subscribe to tax research platforms. Resources such as Bloomberg Tax offer updates as well as analysis from leading practitioners so you can plan and comply with confidence. 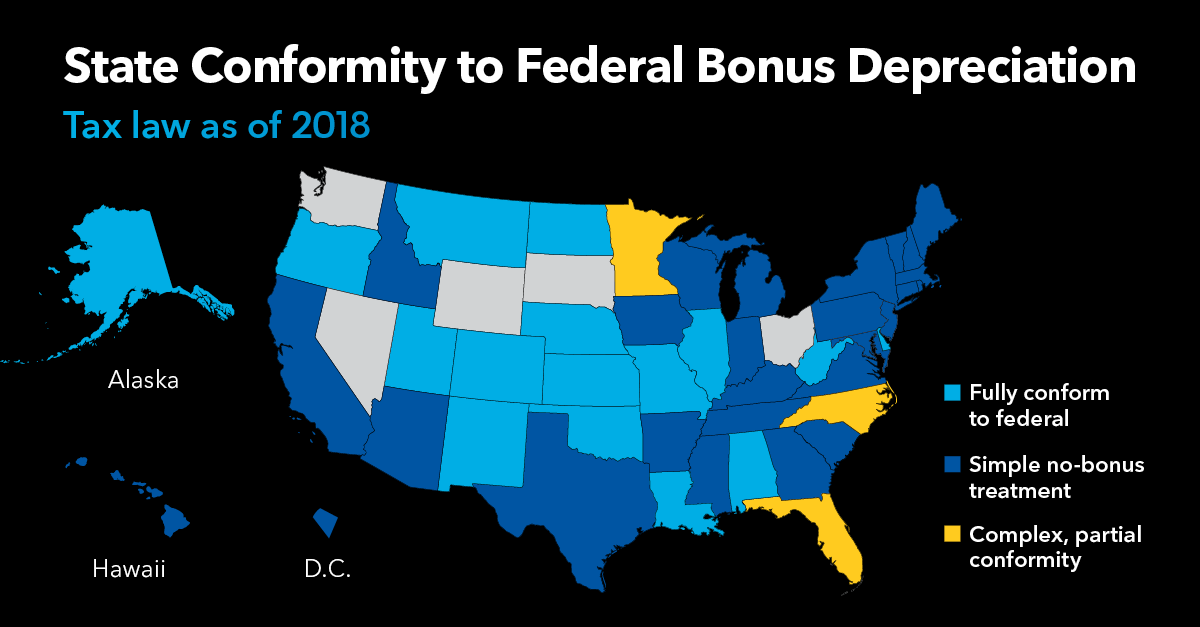 Consider the implications of decoupling.

The most obvious impact of decoupling is that you’re going to have different depreciation expense between federal and state. While that sounds simple enough, it can create a number of complications from a process standpoint.

First, it creates a modification that you’re going to have to report on your state tax returns. And then, considering that states all have different forms, you will need to figure out how to report and what numbers you actually need to report to the state.

“One thing that people don’t often think of when it comes to differences in gains or losses is how that impacts the apportionment factor for states,” Sheehan says. “Some states will actually include a gain or loss in the denominator of a sales factor or in the numerator of a sales factor. So that’s something that can be impactful.”

It can also cause confusion when determining which gain or loss to use in a sales factor.

Having a different adjusted basis also impacts like-kind exchange assets. You’ll need to be stepping into a different set of shoes when you have state depreciation that’s different from federal. Some states, such as Illinois and Pennsylvania, have pretty complex schedules that require you to track your addbacks and subtractions over multiple years, which can be challenging, particularly if you have software that does not do that automatically for you.

Partially conforming states add another layer of complexity. With the multiyear tracking of bonus and 179 expense, you can’t just focus on one year when you run your depreciation reports. You have to be able to look back and track that number across years and then track the subtractions as they go forward.

Need an accurate way to comply with state depreciation across multiple states? Learn more about our calculation feature.

Make technology work for you.

Tax software can not only simplify the fixed assets management life cycle but also save time and money with automated fixed assets tracking, processes, and calculations. With Bloomberg Tax & Accounting Fixed Assets software, you gain accuracy and control to empower better decisions, optimize tax savings, shorten financial close times, and respond to change faster. To make sure you get the most out of your software, we have a few tips.

When using tax depreciation software, it’s ideal to set up different books to calculate your state depreciation. For simple no-bonus states, your book can operate the same way as for federal taxes, but without taking the bonus expense in that book. However, keep in mind you may run into issues where different asset types receive different treatment, or states that have different conformity for different years.

For partially conforming states, you’ll want to have a system in place to track those year-over-year differences, such as addbacks and deductions that are going to give you a net modification each year.

You also want to make sure to reconcile the adjusted basis each period. In the case that you have assets you’ve disposed of, you need to know in which states you can write those off and take the remaining bonus expense or if you have to keep that bonus expense on the books.

“We see a lot of our clients doing this on a spreadsheet, but having it in [tax] software is the best way to go,” Sheehan advises.

Get a free demo of our Fixed Assets state depreciation feature.

Maximize deductions with the right intel.